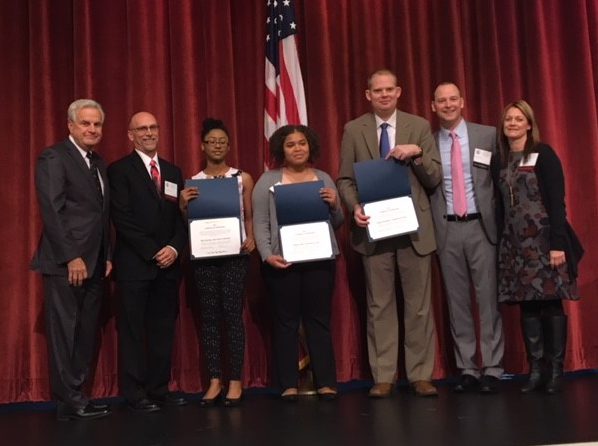 This story is included in the Winter 2017 edition of the Heartland Center’s Quarterly Occupational Health & Safety Newsletter.

When Jack Beno, age 60, lost a long battle with cancer in 1997, the safety world lost a truly inspirational leader. His ideas, guidance and tenacity contributed greatly to the many successes of the Iowa Governor’s Safety Conference and to workplace safety and health throughout Iowa.

Jack was appointed to the Occupational Safety and Health Advisory Council in 1979 after accepting a position at Iowa State University. Jack’s former students continually speak of the profound impact he had on their education and life experiences, and will never forget him or the lessons they learned.

The Jack Beno Scholarship Foundation was established in 1998 to provide scholarships for safety-related education in Iowa colleges. In honor of his memory, many former colleagues, friends, and students have made a contribution to support this cause.

Bill Dickinson served the State of Iowa through his work with the Iowa-Illinois Safety Council, ASSE, and Nationwide Insurance. His work with the council often overlapped with the Governor’s Safety Conference, as he spoke and provided expert speakers on many topics.

Bill Dickinson and Bruce McCann were instrumental in the establishment of the ASSE golf outing that has funded much of the Jack Beno Scholarship fund. More importantly, Bill was constantly mentoring safety professionals throughout the state, encouraging them to excel in their work. Bill and Jack met on a number of occasions to discuss many safety issues affecting the state and the nation.

Gary Higbee captured the spirit and thoughts of many other EHS professionals and colleagues best, stating, “Both men (Jack Beno and Bill Dickinson) were men of honor and stature; I was fortunate to be their friend.”

Get our quarterly OSH newsletter, and be the first to know about continuing education activities:

View All Conferences and Classes